The much anticipated novel from the author of the hilarious Why Mummy Swears. 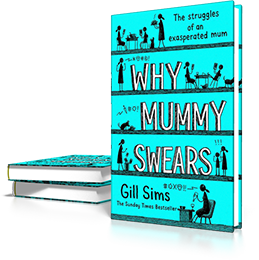 It's every parents' nightmare - the start of the school holidays - and instead of sitting in the sun, reading a book over a cold, crisp glass of Pinot Grigio, Mummy has two bored moppets to attend to. After frantically booking sports camps, child minder slots, not to mention time off work, Mummy is exhausted. But this is only the beginning... After being dragged to join the school's PTA in the new term by an annoyingly kind-spirited neighbour, Mummy is stuck with organising the Christmas Fayre and pleasing all the overly disapproving parents. In combination with getting to know her father's surprise new glamorous (and much younger) wife, and being forced to spend more time with her narcissistic mother, life isn't cutting her much of a break.

Gill Sims is the author and illustrator of the hugely successful parenting blog and Facebook site ‘Peter and Jane’, which boasts over 300,000 fans that follow the updates on the characters of Boy Child Peter, Girl Child Jane, Mummy and Daddy. Peter & Jane have exciting adventures with Mummy. Mummy likes gin. Peter & Jane like starting fires, trying to kill each other and driving Mummy to drink.

Her first book Why Mummy Drinks was the bestselling hardback fiction debut of 2017, spending over six months in the top ten of the Sunday Times Bestseller Charts, and was shortlisted for Debut Novel of the Year in the British Book Awards. Why Mummy Swears is her hotly anticipated second novel.

Gill frequently guest blogs for a parenting websites such as Netmumswhere she tells over her experiences with all walks of parenting from post-natal depression to an evening tipple.

She lives in Scotland with her husband, two children and a recalcitrant Border Terrier, who runs the house.

Gill’s interests include drinking wine, wasting time on social media, trying and failing to recapture her lost youth, and looking for the dog when he decides to go on one of his regular jaunts.

A hugely relatable talent that draws from her own life to colour her stories and in turn, inspire her readers and fans.

I am going to 100% nail being a school mummy this year.

I can totally do this. Yes, this year is definitely going to be much better - I am absolutely not going to shout at the children, let them stuff their faces with crisps or goggle away on the iPad. And...