Krystal Sutherland was born and raised in Townsville, in the humid tropics of far northern Australia. Since moving to Sydney in 2011, she’s also lived in Amsterdam and Hong Kong. Before her book deal, she worked as an editor at her university’s student magazine, and as a foreign correspondent for Hijacked, one of Australia's largest youth culture websites. Krystal has no pets and no children, but in Amsterdam she owned a Dutch bicycle called Kim Kardashian. It was somewhat difficult to get along with; she was fond of it regardless.

Joshua Seigal is a poet, performer and workshop leader who spends his time visiting schools, libraries and theatres around the country and beyond. After completing degrees in Philosophy at Oxford University and University College London Joshua started to realise that he was more interested in people than in merely abstract ideas. He went on to complete an MA in Writing/Education at Goldsmiths College. Teachers have described him as inspirational and a positive role model. He has taken critically-acclaimed poetry shows to the Edinburgh Festival Fringe, but usually ends up performing in front of his mirror, using a hairbrush as a microphone.

Samara graduated with a degree in Illustration from Falmouth University in 2014. After winning the New Designers Hallmark award she spent two months in their studio, before starting work as an in-house designer for a large retailer. She works from her studio in Hertfordshire, and loves nothing more than scribbling away creating fun characters. The editors and designers at Oxford Children had great fun writing this festive story together with Samara (and they ate a lot of biscuits as they wrote). So it seemed only right to choose the yummy author name of Madeleine Cook to appear on the cover! 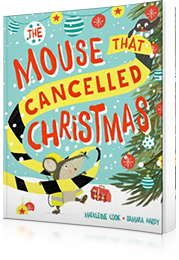 The Mouse that Cancelled Christmas

Chris Whitaker was born and raised in London. After leaving school he spent ten years working as a financial trader in the city, but always dreamed of being a writer. At the age of 30, and with a young family to support, he made the scary decision to quit his job and trade from home in order to find more time to write. He is now poorer, but happier. As a writer, Chris enjoys tackling dark subject matters and mixing them with humour. Tall Oaks is his debut novel, and follows the residents of a small town in California three months after the abduction of a child. He is currently working on his second novel.