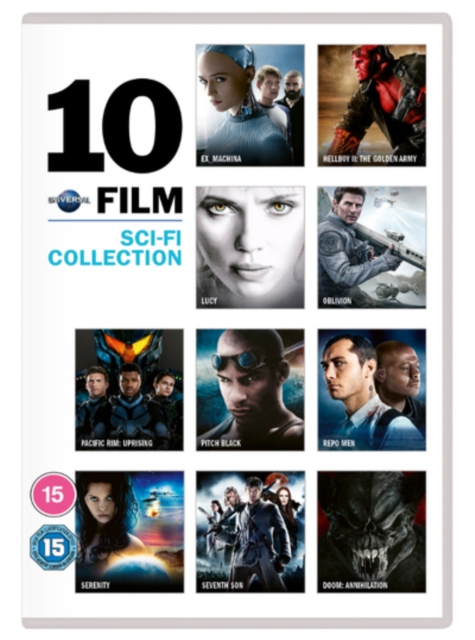 Collection of ten sci-fi adventures. 'Ex Machina' (2015) follows Caleb (Domhnall Gleeson), a promising young programmer who is selected by the CEO (Oscar Isaac) of a large Internet company to spend a week at his retreat in the mountains.

When he arrives, Caleb soon learns that the retreat is in fact the location of a laboratory involved in pioneering research into artificial intelligence and robotics and is home to the world's first fully sentient robot (Alicia Vikander).

However, as the two men interact more and more with the AI, it becomes apparent that she is more sophisticated than they ever imagined.

In 'Hellboy II' (2008), the mythical world starts an uprising against humanity in a bid to take over the Earth and Hellboy (Ron Perlman) and his team are all that stand in their way.

Can the superheroic red-faced demon prevent the destruction of mankind once again?

In 'Lucy' (2014), Scarlett Johansson stars as the titular heroine who finds herself caught up in the dodgy dealings of the Taiwanese mob while living in Taipei.

Meanwhile, neurological scientist Professor Norman (Morgan Freeman) takes an interest in Lucy's evolution as she takes revenge on those responsible for her extraordinary transformation and evades those who wish to harness her powers for their own ends.

In 'Oblivion' (2012), 60 years after Earth is subjected to an alien attack that decimates the environment forcing survivors to live in colonies high above the clouds, drone repairman Jack Harper (Tom Cruise) is nearing the end of his deployment to retrieve remaining resources from the planet's surface.

But Jack's world is suddenly turned upside down when he discovers a group of humans led by Malcolm (Morgan Freeman) still surviving amidst the rubble.

Warned by his partner Victoria (Andrea Riseborough) not to get involved, Jack's curiosity soon sets in motion a chain of events that leads him to question everything he's previously been told.

In 'Pacific Rim - Uprising' (2018), when the deadly Kaiju monsters once again rise up from the deep, a group of young Jaeger pilots are forced to join forces and fight back.

With the fate of the world in the balance, the rebellious Jake Pentecost (John Boyega), whose father gave his life to defeat the Kaiju ten years before, is given one last chance to complete his pilot training and joins up with Mako Mori (Rinko Kikuchi), 15-year-old hacker Amara (Cailee Spaeny) and hotshot rival Lambert (Scott Eastwood) in a bid to defeat the merciless Kaiju threat and save the world.

In 'Pitch Black' (1999), with forty passengers on board technical problems force the spaceship Hunter-Gratzner to crash land on a distant planet.

The passengers were heading for other worlds and only ten have managed to survive, but one of them, Riddick (Vin Diesel), is an armed and dangerous convict determined to take control of events.

The planet at first seems barren, with no evidence of water or living creatures, but when the sun sets the survivors discover they have the planet's terrifying nightlife to contend with.

In 'Repo Men' (2010), supplying sophisticated and hugely expensive artificial organs to those in need, multinational company 'The Union' has a virtual monopoly on life and death.

Unfortunately, for those who can't keep up the repayments, the firm's repo men are despatched to reclaim company property - no matter the consequences for the customer.

After suffering a heart attack on the job, top repo man Remy (Jude Law) wakes to find the company have fitted him with the latest heart replacement, along with a sizeable debt repayment.

Unable to make the payments, and rapidly losing his taste for the job, Remy goes on the run, teaming up with his former wife Beth (Alice Braga) who is also fleeing the system.

Now pursued by his former partner, Jake (Forest Whitaker), Remy must utilise all the skills he possesses to turn the tables on his former employers.

In 'Serenity' (2005), set 500 years in the future, after a galactic civil war has united all the space colonies under the repressive Alliance former rebel soldier Mal Reynolds (Nathan Fillion) captains the Firefly class cargo ship Serenity, taking on odd jobs and scoring heists where he can to keep his ship and his crew in the air.

When he picks up Simon Tam (Sean Maher) and his disturbed sister River (Summer Glau), Mal ends up with more trouble than he could have bargained for.

On the run from the Alliance, River has been the subject of horrific government experiments to develop her latent psychic powers.

Determined to get her back, the Alliance dispatches ruthless assassin The Operative (Chiwetel Ejiofor), leaving Mal and his crew battling for survival as they race across the galaxy.

However, when they then discover an even darker secret the Alliance would like to keep hidden, Mal and his companions finally have their chance to hit back.

In 'Seventh Son' (2013), John Gregory (Jeff Bridges) is an ageing Spook who is responsible for protecting his town against all sorts of supernatural creatures.

He is the last remaining Spook, however, and has been unsuccessful in finding a replacement - all of his apprentices have died.

He seeks out a new apprentice in the form of Tom Ward (Ben Barnes), who is the seventh son of a seventh son.

Tom joins Gregory in his battle against the evil witch Mother Malkin (Julianne Moore) and along the way meets and falls for her niece (Alicia Vikander), learning that not all witches are wicked.

But will he be able to defeat Malkin and prove himself worthy as a Spook?

Finally, in 'Doom: Annihilation' (2019), when a group of UAC Marines answer a distress call from Martian moon Phobos, they discover it is coming from a top-secret scientific base that they are not supposed to know about.

As they prepare to embark on a rescue mission they realise that the secret base is actually housing a portal to Hell and has been infiltrated by demons who intend to release their powers on Earth. 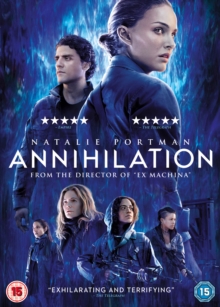 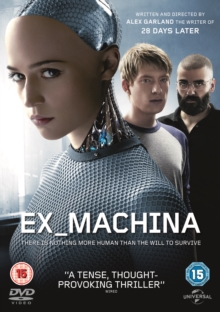 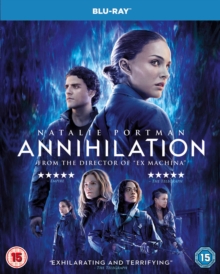 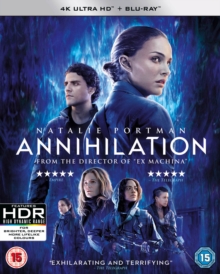