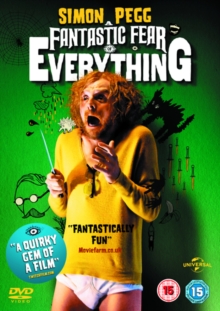 A Fantastic Fear of Everything DVD

Simon Pegg stars in this low-budget British comedy about a writer whose research into Victorian serial killers has rendered him an emotional wreck.

Jack (Pegg) is a highly-strung and over-sensitive artist whose paranoia has reached such heights that he can no longer leave the house without carrying a carving knife just in case someone tries to murder him.

When his agent informs him that a Hollywood executive is interested in his latest script, 'Decades of Death', and tells him that he must prepare himself for this important meeting, a string of unlikely events is triggered that leads to Jack being finally forced to face up to all of his worst and wildest fears.

A Fantastic Fear of Everything