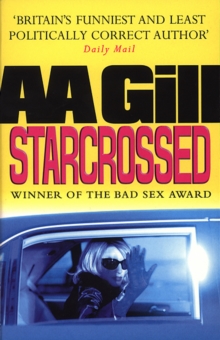 by A A Gill

A.A. Gill's first novel, SAP RISING, garnered a galaxy of reviews when it was published, from the enchanted 'Among the most original novels of the year' (Financial Times) to the hysterical 'Do not buy this book' (Guardian), from the delirious 'Extremely funny' (Time Out) to the outraged 'Frightful pile of garbage', to the contradictory 'He writes so brilliantly' (Daniel Farson, Evening Standard), 'Extremely badly written, hideously and unamusingly obscene' (A.N.

Wilson, Evening Standard). It can reasonably be said that SAP RISING was one of the most visible books of the year. Now comes something equally striking and completely different: STARCROSSED. Like Byron, John Dart, poet and bookshop assistant, wakes up one morning and finds himself, if not quite famous, then the next best thing: in bed with someone famous.

Lee Montana, singer, film star and the most famous woman in the world, wakes up one morning and finds she's had carnal knowledge of a shop assistant - which doesn't have quite the same exclamatory ring to it.

Antigone doesn't wake up at all. She is a 2,000-year-old dead Greek girl with a truculent disposition and a bad dose of destiny.

Tentatively, John and Lee embark on a sort of affair with three unequal partners: the two of them and Antigone's bitter shadow. Is fame the beauty parlour of the dead? Can the gods fall in love? Should a poet fuck with his muse? In his dazzling new novel A.A. Gill flirts with capricious destiny and hitchhikes on the boulevard of fate.