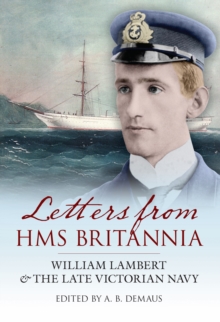 Edited by A. B. Demaus

Before William Stanley Lambert became a cadet in 1883, he had already sailed 44,890 miles round the world in a childhood voyage that took him two years to complete.

He returned to England determined to pursue a career in the Royal Navy. His letters home from the service, assiduously compiled by A.

B. Demaus, record the experience of a capable, ambitious cadet during a time of rapid technological change and relative peace.

The Navy's task of protecting the empire's vast assets had not been interrupted by a major war since Nelson's day. Lambert's sea service, virtually all of which was overseas, involved time in two corvettes, an ironclad central battery ship, two cruisers, and a battleship.

In his later career, he became the commanding offi cer of one of the earliest destroyers.

He vividly describes the shipboard life and 'runs ashore' in an account laced with a splendidly dry sense of humour - a familiar feature of naval offi cers of his rank until at least the 1940s. The march of technology and political change since Lambert's time have made this period of Victorian naval history remote, but Letters from HMS Britannia makes the concerns of the imperial subject relevant once more.