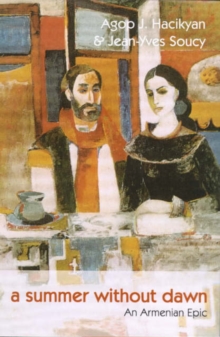 A Summer without Dawn : An Armenian Epic Hardback

Through the epic story of the Balian family, this work recounts the tragic fate and struggle for survival of the Armenian people during World War I.

Vartan Balian scours the Turkish empire in search of his wife Maro and their son, both deported from ancestral lands with tens of thousands of compatriots.

Maro and her son manage to escape the ongoing genocide and find shelter in Riza Bey, a wealthy Turkish governor who falls deeply in love with Maro.

Almost four years will pass before Vartan and Maro are reunited.

Can they overcome the bitterness and doubts of survival and forget each others' intervening relationships: hers with Riza Bey and his with the passionate Aroussiag, who saved him from certain death at the risk of her own life? And what of their son Tomas, who mysteriously disappeared from Riza Bey's home.

If he ever returns, would they want him to find safety in a free Armenia - still a dream to them - or in a new life far away in America?