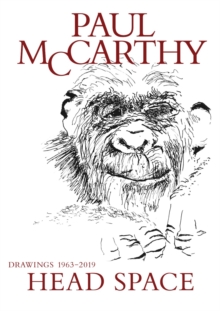 A prolific social critic, Paul McCarthy is best known for his work in performance, installation, film, and sculpture.

His drawings and films skewer, often profanely, mass media and consumer-driven American society by pointing to its hypocrisy, double standards, and repression.

McCarthy's work is also deeply influenced by European avant-garde art, especially by figures such as Joseph Beuys and Samuel Beckett, and Viennese Actionism.

Featuring 50 years of works on paper in charcoal, pencil, pen and ink, and collage, this selection includes pieces from McCarthy's renowned "White Snow" series, his contributions to the "Plato in L.A." project at the Getty Museum, and recent sketches in which, unsurprisingly given the current political climate, McCarthy's gloves-off approach feels both necessary and inevitable.

This book reveals an important aspect of his drawing techniques, and situates his works on paper as one of the most significant in contemporary art.