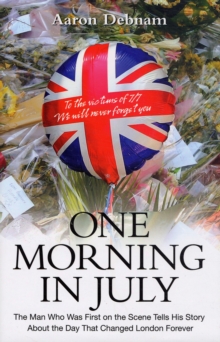 One Morning in July : The Man Who Was First on the Scene Tells His Story Hardback

'I can remember the events of that morning as clearly as if they had happened to me yesterday.

In fact, I think they will be etched onto my memory for the rest of my life.

That day was an experience so profound that it had affected every aspect of my existence ever since, and I have no doubt that it has changed me fundamentally as a person...' On 7th July 2005, as morning rush hour was drawing to a close, four suicide bombers struck in central London, killing 52 people and injuring hundreds more.

Three bombs were detonated on underground trains just outside Liverpool Street and Edgware Road stations and on another travelling between King's Cross and Russell Square.

The final explosion was on a double-decker bus in Tavistock Square.

PC Aaron Debnam is a rapid response officer with the British Transport Police and it was his unit that took the call to attend Russell Square station.

Nothing could have prepared him for the devastation and chaos that he would encounter when he was first on the scene that horrific day. His great inner strength and courage got him past the hoardes of lost and shocked commuters, down into the smoke filled, blisteringly hot underground tunnel and onto the train to try and help those who were still alive.

This deeply moving and personal recollection offers a unique insight into a terrorist attack that shocked the whole country and reminds us that, even in the face of a tragedy of such devastating proportions, the goodness of the human spirit can still shine through.

It also explored the lasting effect that the attacks had on Aaron and how he has struggled to come to terms with what he encountered that day.

The power of this story will change your life.