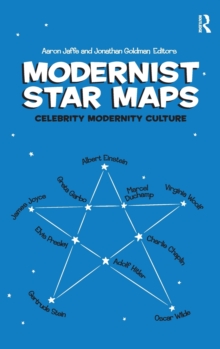 Bringing together Canadian, American, and British scholars, this volume explores the relationship between modernism and modern celebrity culture.

In support of the collection's overriding thesis that modern celebrity and modernism are mutually determining phenomena, the contributors take on a range of transatlantic canonical and noncanonical figures, from the expected (Virginia Woolf and F.

Scott Fitzgerald) to the surprising (Elvis and Hitler).

Illuminating case studies are balanced by the volume's attentiveness to broader issues related to modernist aesthetics, as the contributors consider celebrity in relationship to identity, commodification, print culture, personality, visual cultures, and theatricality.

As the first book to read modernism and celebrity in the context of the crises of individual agency occasioned by the emergence of mass-mediated culture, Modernist Star Maps argues that the relationship between modernism and the popular is unthinkable without celebrity.

Moreover, celebrity's strange evolution during the twentieth century is unimaginable without the intercession of modernism's system of cultural value.

This innovative collection opens new avenues for understanding celebrity not only for modernist scholars but for critical theorists and cultural studies scholars.