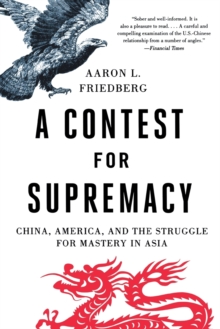 A Contest for Supremacy : China, America, and the Struggle for Mastery in Asia Paperback / softback

There may be no denying China's growing economic strength, but its impact on the global balance of power remains hotly contested.

He explains how the United States and China define their goals and reveals the strategies each is now employing to achieve its ends.

Friedberg demonstrates in this provocative book that the ultimate aim of Chinese policymakers is to "win without fighting," displacing the United States as the leading power in Asia while avoiding direct confrontation.

The United States, on the other hand, sends misleading signals about our commitments and resolve, putting us at risk for a war that might otherwise have been avoided.

A much-needed wake-up call to U.S. leaders and policymakers, A Contest for Supremacy is a compelling interpretation of a rivalry that will go far to determine the shape of the twenty-first century.