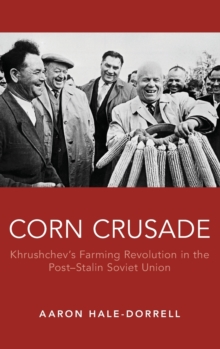 Lasting from 1953 until 1964, this crusade was an emblematic component of his efforts to resolve agrarian crises inherited from Joseph Stalin.

Using policies and propaganda to pressure farms to expand corn plantings tenfold, Khrushchevexpected the resulting bounty to feed not people, but the livestock necessary to produce the meat and dairy products required to make good on his frequent pledges that the Soviet Union was soon to "catch up to and surpass America." This promised to enrich citizens' hitherto monotonous diets and score a victory inthe Cold War, which was partly recast as a "peaceful competition" between communism and capitalism. Khrushchev's former comrades derided corn as one of his "harebrained schemes" when ousting him in October 1964.

Echoing them, scholars have ridiculed it as an "irrational obsession," blaming the failure on climatic conditions.

Borrowing technologies from the United States, Khrushchev expected farms in the Soviet Union to increase productivity because he believed that innovations developed under capitalism promised greaterreturns under socialism.

These technologies generated results in many economic, social, and climatic contexts after World War II but fell short in the Soviet Union.

Weighing competing incentives, they flouted his authority by doing enough to avoid penalties, but too little to produce even modest harvests of corn, let alone the bumper crops the leader envisioned.