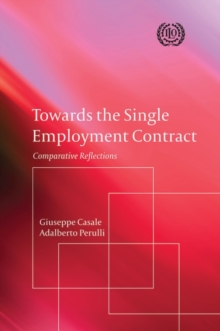 This book examines the concept of the single employment contract, tracing it from its genesis and evaluating its pros and cons in the context of the current labour market problems in selected European countries.

The book adopts a comparative approach to examining the single employment contract, highlighting its virtues and revealing its inherent contradictions.

The authors set out the general framework within which the current debate has developed by outlining the origins that gave rise to the proposal of a single employment contract.

They then review the debate on labour market segmentation and the flexicurity proposal, and examine the key characteristics of the single employment contract as well as the arguments put forward both for and against it.

Case studies show how the idea has been taken up in France, Italy and Spain.

The book concludes with a concise review of contractual arrangements in EU labour markets and of possible future projections and developments.

The book is aimed at academics and practitioners interested in labour market and labour legislation reforms. The book is a co-publication between Hart Publishing and the International Labour Organization.