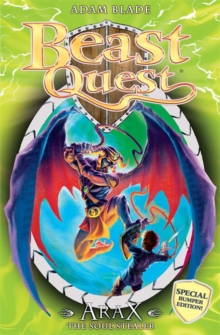 Battle Beasts and fight Evil with Tom and Elenna in the bestselling adventure series for boys and girls aged 7 and up!Arax the Soul Stealer has snatched away good Wizard Aduro's spirit, leaving the kingdom exposed to the evil of Wizard Malvel.

To save Aduro, Tom tracks Arax to his cave - but the terrible Beast wants Tom's soul, too... If you like Beast Quest, check out Adam Blade's other series: Team Hero, Sea Quest and Beast Quest: New Blood!