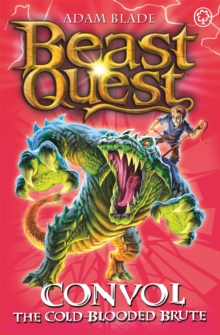 Battle fearsome beasts and fight evil with Tom and Elenna in the bestselling adventure series for boys and girls aged 7 and up. Tom and his companions have arrived in a strange new land - Tavania.

To restore harmony, Tom must first face Convol the Cold-blooded Brute in a deadly desert duel... There are SIX thrilling adventures to collect in the Beast Quest: The Lost World series: Convol the Cold-Blooded Brute; Hellion the Fiery Foe; Krestor the Crushing Terror; Madara the Midnight Warrior; Ellik the Lighning Horror; Carnivora the Winged Scavenger. If you like Beast Quest, check out Adam Blade's other series: Team Hero, Sea Quest and Beast Quest: New Blood!