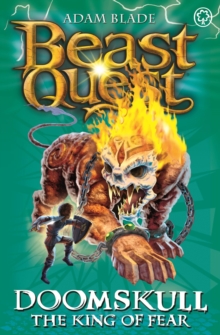 Battle fearsome beasts and fight evil with Tom and Elenna in the bestselling adventure series for boys and girls aged 7 and up. Doomskull the King of Fear, Malvel's most terrifying Beast yet, has kidnapped King Hugo!

If Tom fails to save him, Avantia is doomed. Tom must fight harder than he has ever done before to win the day!There are SIX thrilling adventures to collect in the Beast Quest: Master of the Beasts series: Noctila the Death Owl; Shamani the Raging Flame; Lustor the Acid Dart; Voltrex the Two-Headed Octopus; Tecton the Armoured Giant; Doomskull the King of Fear. If you like Beast Quest, check out Adam Blade's other series: Team Hero, Sea Quest and Beast Quest: New Blood!