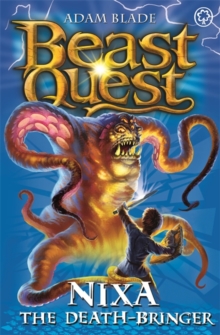 Taladon the Swift has returned! But to Tom's horror, his father is a ghost. To save Taladon, Tom must battle the Ghost Beasts and collect the pieces of the shattered Amulet of Avantia.

First is Nixa the Death-Bringer - will her deadly disguises lure Tom to his death?There are SIX thrilling adventures to collect in the Beast Quest: The Amulet of Avantia series: Nixa the Death-Bringer; Equinus the Spirit Horse; Rashouk the Cave Troll; Luna the Moon Wolf; Blaze the Ice Dragon; Stealth the Ghost Panther. If you like Beast Quest, check out Adam Blade's other series: Team Hero, Sea Quest and Beast Quest: New Blood!