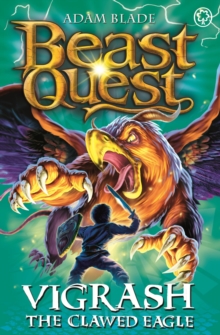 Battle fearsome beasts and fight evil with Tom and Elenna in the bestselling adventure series for boys and girls aged 7 and up. Six new Evil Beasts have been sent to destroy the Good Beasts of Avantia!

Tom and his faithful companion, Elenna, must hunt down the invaders and destroy them.

If he fails, the kingdom will face ruin, death and destruction. There are SIX thrilling adventures to collect in the Beast Quest: The Darkest Hours series: Solak Scourge of the Sea; Kajin the Beast Catcher; Issrilla the Creeping Menace; Vigrash the Clawed Eagle; Mirka the Ice Horse; Kama the Faceless Beast. If you like Beast Quest, check out Adam Blade's other series: Team Hero, Sea Quest and Beast Quest: New Blood!