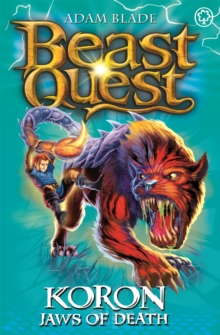 Battle fearsome beasts and fight evil with Tom and Elenna in the bestselling adventure series for boys and girls aged 7 and up. Tom faces his toughest Beast Quest yet - he must find the Tree of Being to rescue Freya and Silver from Tavania.

Can our hero outwit cunning Koron?There are SIX thrilling adventures to collect in the Beast Quest: The Pirate King series: Balisk the Water Snake; Koron the Jaws of Death; Hecton the Body Snatcher; Tomo the Hurricane Dragon; Kronus the Clawed Menace; Bloodboar the Buried Doom. If you like Beast Quest, check out Adam Blade's other series: Team Hero, Sea Quest and Beast Quest: New Blood!