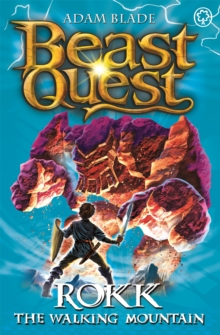 Battle fearsome beasts and fight evil with Tom and Elenna in the bestselling adventure series for boys and girls aged 7 and up. Tom is on a quest to free the Mistress of the Beasts from an evil curse.

But when he arrives in a mountain town devastated by terrible rockfalls, he realises the destruction has been wreaked by a Beast as powerful as the mountain itself... There are SIX thrilling adventures to collect in the Beast Quest: The Shade of Death series: Krabb Master of the Sea; Hawkite Arrow of the Air; Rokk the Walking Mountain; Koldo the Arctic Warrior; Trema the Earth Lord; Amictus the Bug Queen. If you like Beast Quest, check out Adam Blade's other series: Team Hero, Sea Quest and Beast Quest: New Blood!