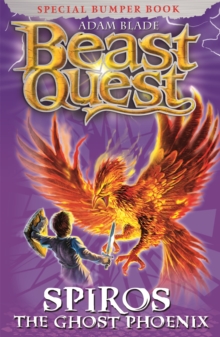 Battle Beasts and fight Evil with Tom and Elenna in the bestselling adventure series for boys and girls aged 7 and up!Evil Wizard Malvel has kidnapped Tom's aunt and uncle - the only family he has since his father, Taladon, went missing.

The only way Tom can rescue them is to uncover the last secret of the Beasts... There is in fact a seventh Beast: Spiros the Ghost Phoenix.

She guards the skies, caught between life and death.

But she has the power of All-Sight, and only she will be able to find where Tom's aunt and uncle are being kept.

Tom must take to the skies to find Spiros. While there's blood in his veins, he will not let Malvel destroy the only family he has left... If you like Beast Quest, check out Adam Blade's other series: Team Hero, Sea Quest and Beast Quest: New Blood!