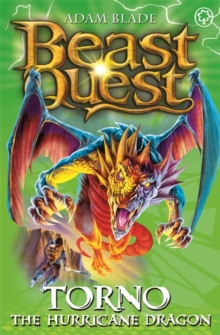 Battle fearsome beasts and fight evil with Tom and Elenna in the bestselling adventure series for boys and girls aged 7 and up. A new Beast soars in the skies over Avantia! Torno the Hurricane Dragon has been summoned by Sanpao the Pirate King to stop Tom in his Quest to rescue Freya and Silver.