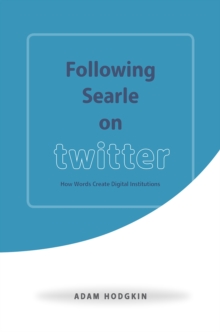 Adam Hodgkin thinks Twitter is much more than a mere social media tool it is a terrain ripe for a conceptual and theoretical analysis of our use of digital language.

In Following Searle on Twitter, Hodgkin takes John Searle's theory of speech acts as Status Function Declarations (SFDs) speech acts that fulfill their meaning by saying the right words in the right context as a probe for understanding Twitter's institutional structure and the still-developing toolset that it provides for its members.

He argues that Twitter is an institution built, constituted and evolving through the use of SFDs.

Searle's speech act theories provide a framework for illuminating how Twitter membership arises, how users of Twitter relate to each other by following, and how increasingly complex content is conveyed with tweets.