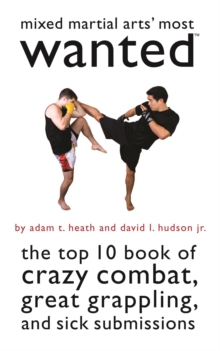 Mixed martial arts hasn't been dubbed the world's fastest growing sport for nothing.

It's noticeably rocked the sporting world since the creation of the Ultimate Fighting Championship nearly two decades ago-and has even shaken up the pop culture scene.

Who would have expected popular MMA fighter Chuck Liddell to trade in his sparring gloves for dance shoes on Dancing with the Stars?

A combo of grappling, punching, kneeing, and kicking, this sport looks like it will be grounding and pounding, sprawling and brawling, for some time to come. Mixed Martial Arts'Most Wanted (TM) steps into the cage and brings you round after round of fighting deeds and details worthy of a sport known for bloody battles and ingenious tactics.

Authors Adam T. Heath and David L. Hudson Jr. have knocked out sixty top-ten lists detailing the low blows, grappling greats, human anomalies, and fighting females that make up the compelling world of mixed martial arts.There's no need to be an insider-Heath and Hudson bring you all of the sport's best bouts, dirtiest moves, and brainscrambling kayos in a book that will keep MMA enthusiasts reeling for months.