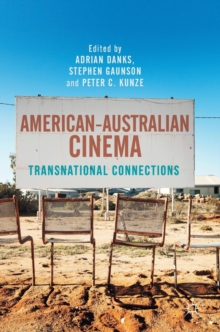 This edited collection assesses the complex historical and contemporary relationships between US and Australian cinema by tapping directly into discussions of national cinema, transnationalism and global Hollywood.

While most equivalent studies aim to define national cinema as independent from or in competition with Hollywood, this collection explores a more porous set of relationships through the varied production, distribution and exhibition associations between Australia and the US. To explore this idea, the book investigates the influence that Australia has had on US cinema through the exportation of its stars, directors and other production personnel to Hollywood, while also charting the sustained influence of US cinema on Australia over the last hundred years.

It takes two key points in time-the 1920s and 1930s and the last twenty years-to explore how particular patterns of localism, nationalism, colonialism, transnationalism and globalisation have shaped its course over the last century.

The contributors re-examine the concept and definition of Australian cinema in regard to a range of local, international and global practices and trends that blur neat categorisations of national cinema.

Although this concentration on US production, or influence, is particularly acute in relation to developments such as the opening of international film studios in Melbourne, Sydney, Adelaide and the Gold Coast over the last thirty years, the book also examines a range of Hollywood financed and/or conceived films shot in Australia since the 1920s.