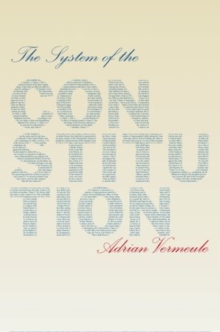 The System of the Constitution Hardback

Systems theory illuminates both the structural constitution and constitutional judging, and revealsthat standard views and claims about constitutional theory commit fallacies of aggregation and are thus invalid. By contrast, Vermeule explains and illustrates an approach to constitutionalism that considers the systemic interactions of legal and political institutions and of the individuals who act withinthem.