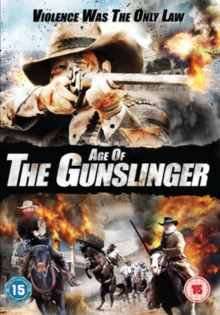 Age of the Gunslinger DVD

Low-budget western, starring Angus Macfadyen as the notorious saloon owner, Will Tunney, who shatters the childhood innocence of James Conners (Justin Ament) when he murders the boy's father, played by William Sadler. 15 years on, Conners returns to his hometown of Legend, New Mexico to avenge his father's death and to renew his relationship with long-lost love Mary (Marnie Alton).

He soon discovers Tunney to be an even more forceful opponent when Tunney defeats him and leaves him to die.

After rescuing Connors, two Native Americans, Washakie (Michael Spears) and Miakoda (Tonantzin Carmelo), encourage him to not seek revenge and instead, reflect within himself to let go of the past.