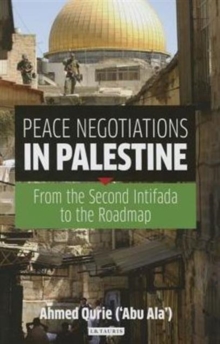 Peace Negotiations in Palestine : From the Second Intifada to the Roadmap Hardback

The start of the twenty-first century in Palestine saw the breakdown of the Oslo Accords (which, signed in 1993 was an attempt to begin the resolution of the Israeli-Palestinian conflict) give way to a turbulent period of dashed hope, escalating violence and internal division.

Tracking developments from the Second Intifada of 2000 to Hamas' 2006 electoral victory, former Palestinian Prime Minister Ahmed Qurie provides revealing and first-hand detail of the monumental changes that have rocked the peace process and the region as a whole.

New proposals, such as the Arab Peace Initiative and the Road Map, and historic events, including the death of iconic leader Yasser Arafat and Ariel Sharon's withdrawal from Gaza, are recognised to be of immense significance.

However, it is Qurie's unique position that reveals a new perspective of how they played out on the stages of Palestinian internal governance, regional politics and international diplomacy.

Beyond Oslo, the Struggle for Palestine