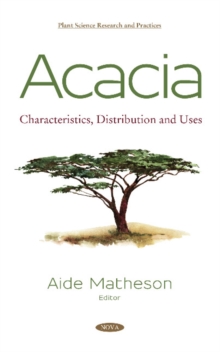 Acacia: Characteristics, Distribution and Uses opens with a chapter describing the wood of A. melanoxylon grown in Portugal in view of determining its technological quality for use in the construction and furniture industry.

The characterization includes stem features, wood anatomical characteristics, chemical composition, wood density and mechanical properties.Next, the authors aim to describe and analyze common characteristics among Acacia s.l. species and to trace some parallelisms of their performance throughout several ecosystems that hold such species.

It is well-known that Acacia s.l. species have the ability to fix atmospheric nitrogen and may modify soil chemistry and physics by enabling microorganisms/soil fauna to alter the microhabitat beneath the tree, and such characteristics are significant in the recovery of ecosystems.The potential of Acacia mangium, an exotic species, for restoration of a degraded land in Mt.

Results suggested a general trend of changes in A. mangium plantation which was once a grassland dominated by Imperata cylindrica and Saccharum officinarum.

Both (stems ha-1) and basal area (m2 ha-1) increased significantly in 2010-2018 (P=0.001).The authors discuss the way in which NMR spectroscopy applied to the study of gum exudates has become important since the 1990 s in Venezuela.

Analytical and structural studies of 23 species belonging to different genera and families have been reported through the combination of classic methodology for carbohydrates and NMR spectroscopy.The footprints left by evolution in the distribution of characters among current organisms have been one of the main tools in the study of organic evolution.

The authors propose that the reconstruction of ancestral character states offers the possibility of knowing the changes suffered by characters in a species throughout evolutionary time.Pollinosis, also known as pollen allergy, hay fever or seasonal allergic rhinitis is one the most common respiratory disorders throughout the world.

The inhalation of Acacia pollen is one of the main causes of respiratory allergic diseases in semiarid countries such as Iran, Saudi Arabia, and the United Arab Emirates.

This book suggests that the recognition of allergenic components of pollens is essential for component-resolved diagnosis, the design of patient-specific immunotherapy, and the explanation of sensitization mechanisms to various allergens.The authors analyze Acacia-Pseudomyrmex mutualism which includes 15 species of acacias and a group of 10 species of mutualistic ants whose geographical distribution is similar.

This relationship is frequently cited as an example of coevolution, a term that has been used to refer to the reciprocal change of interacting species where each of them acts as an agent of natural selection with respect to the other and where the reciprocal selection would result in congruent phylogenies.The concluding chapter characterizes the A. melanoxylon wood pulping performance regarding yield and kappa number as well as the pulp and paper properties.

The application of fast spectroscopic technologies for pulp quality determination is also described.