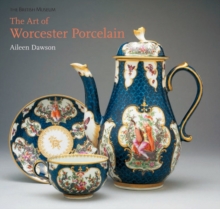 The Art of Worcester Porcelain : 1751-1788: Masterpieces from the British Museum collection Hardback

Porcelain has been made in Worcester since 1751. Unlike many other porcelain factories established in Britain from the mid-18th century, the Worcester factory seems, after the first few years, to have concentrated on mass-production and much survives for collectors to enjoy.

The use of blue and white decoration and the technique of transferprinting capitalised on the taste for Chinese-inspired scenes and topical, rustic or classical subjects while keeping production costs in check.

More lavish hand-decorated pieces had coloured grounds and were often painted with birds.

Some was decorated in London at the Soho workshop of James Giles.

The British Museum's extensive collection of Worcester from the period 1751-83 stems largely from that formed in the early 20th century by Mr and Mrs Frank Lloyd, and is now amongst the most representative to be found anywhere; it includes many pieces decorated by the Giles workshop.

This lavishly illustrated book showcases 100 of the most important, attractive and interesting pieces, many of which are published here for the first time, and places them in their historical context.

It serves both as an enlightening introduction to the subject for the non-specialist and as an essential source book for the collector.