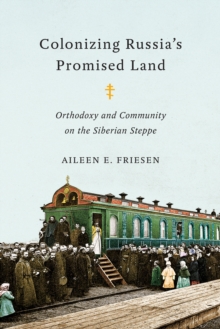 The movement of millions of settlers to Siberia in the late nineteenth and early twentieth centuries marked one of the most ambitious undertakings pursued by the tsarist state.

Russian state officials aspired to lay claim to land that was politically under their authority, but remained culturally unfamiliar.

By exploring the formation and evolution of Omsk diocese - a settlement mission - Colonizing Russia's Promised Land reveals how the migration of settlers expanded the role of Orthodoxy as a cultural force in transforming Russia's imperial periphery by "russifying" the land and marginalizing the Indigenous Kazakh population.

In the first study exploring the role of Orthodoxy in settler colonialism, Aileen Friesen shows how settlers, clergymen, and state officials viewed the recreation of Orthodox parish life as practised in European Russia as fundamental to the establishment of settler communities, and to the success of colonization.

Friesen uniquely gives peasant settlers a voice in this discussion, as they expressed their religious aspirations and fears to priests and tsarist officials.

Despite this agreement, tensions existed not only among settlers, but also within the Orthodox Church as these groups struggled to define what constituted the Russian Orthodox faith and culture.