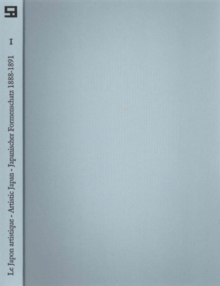 This is the eighth part of a successful series which provides art historians and students with primary-source materials relating to the Western reception of Japanese arts from the late nineteenth to the early twentieth century. It is now common knowledge that art collectors in Europe around the end of the nineteenth century played a very important role in the development of Japanese influence on Western art, in particular on the Impressionists who became acquainted with Ukiyoe by Hokusai, or other Japanese artefacts, many of which were imported from Japan by art dealers for their clients in Europe. The figure who played the most important role in such a European art community is Siegfried Bing (known simply as S.

Bing), a German art dealer who relocated to Paris in the mid-nineteenth century.

He imported and introduced Japanese art and later opened the now famous gallery, the Maison de l'Art Nouveau, which showed works of artists of what would become known as the Art Nouveau style.

In 1888, he launched a monthly magazine on Japanese art and culture simultaneously in three languages editions (French, English and German) and published 36 issues over three years (in total of 108 issues in different editions).

Each issue has a beautifully decorated cover and approx. ten full colour plates of Japanese prints and other Japanese art and numerous illustrations in black and white.

The leading art critics and specialists on Japanese art contributed articles which covered a wide variety of arts, including craft works, architecture and theatre.

This fascimile edition is the first complete reproduction of all issues of all three editions (in a slightly reduced format) with all covers and plates.

Although there are academic and art libraries which hold the back issues of this most important document of the history of Japanese art, the majority of such collections lack some editions or some plates or jacket.