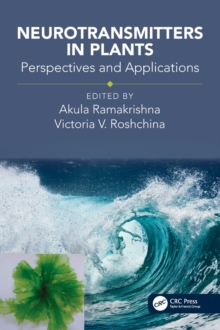 Key features:Presents the latest trends and developments of neuromediators in plantsProvides in-depth coverage of plants enriched in neurotransmitters (especially serotonin, melatonin, and dopamine) and how they are used in medicine, pharmacy, and food nutritionDiscusses the physiological role of the neurotransmitters (biomediators) in non-nervous systems including the analysis of effects on the growth and development and stress defenseCovers the occurrence of the substances that act in human and animal nervous system in plants as a phenomenon of the universal irritability feature for biologistsReveals the occurrence and possible physiological functions of biogenic amines in plants, food, and human health New scientific data confirm the origin of neurotransmitters in the ancient ocean, whose inhabitants use the compounds in their relationships.

One example is the algae Ulvaria, whose image is represented on the cover.

Researchers have paid special attention to their functions in plants, the oxygen well of our planet.

This book provides powerful tools for both analyzing and manipulating organisms, considering the functions of neurotransmitters in plant cells and the practical application of knowledge about acetylcholine, catecholamines, serotonin, melatonin, histamine, gamma-aminobutyric acid and glutamine for ecology, agriculture, medicine and food industries.

Neurotransmitters in Plants: Perspectives and Applications presents information on: the location and biosynthesis where neurotransmitters occur the molecular biology of some enzymes participating in the process their role in vivo and in vitro processes their functions in plant environmental adaptation in plants their role in enriching the food and medicinal value of plants.