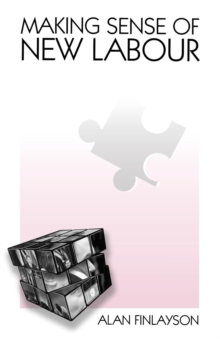 by Alan (Lecturer, Department of Politics and International Relations, University of Wales, Finlayson

This book makes sense of New Labour by interpreting its ideas and practices as symptoms of the times in which we live.

Making Sense of New Labour is an in-depth study, interpreting a wide range of material, including party political broadcasts and other election material, Tony Blair's speeches, and internal policy discussion.

Finlayson disentangles and analyses the different elements of New Labour's political philosophy, which he argues is in large part a reflection of the culture and politics of contemporary capitalism.

As such the party inevitably finds itself managing a status quo rather than driving genuine change.

The book considers: - Labour's marketing strategy and susceptibility to consumer culture - the rhetoric and practice of modernisation - the place of the Third Way in the context of recent British political and intellectual history - the meaning of the 'knowledge economy' and significance of welfare-to-work - Labour's conception, and management, of the state Alan Finlayson is a Lecturer in the Department of Politics and International Relations, University of Wales Swansea.