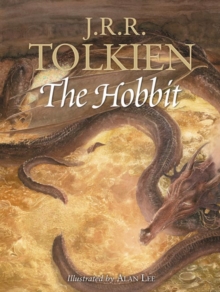 Sumptuous, oversized hardback edition of the classic adventure, fully illustrated with over 60 watercolour and pencil illustrations by award-winning artist, Alan Lee, Conceptual Designer on Peter Jackson's THE HOBBIT trilogy. J.R.R. Tolkien's great classic work, The Hobbit, celebrated its 60th year of publication (1937) with a gorgeous illustrated edition by artist Alan Lee, winner of the Kate Greenaway medal for illustration, and creator of the fabulously successful Centenary edition of The Lord of the Rings. Containing 22 full colour illustrations depicting key scenes from this all-time classic (scenes such as Gollum and Bilbo, The Wargs, Smaug the Dragon and The Battle of the Five Armies), this beautifully designed volume also includes a wealth of integrated pencil drawings which demonstrate perfectly Alan's genius at work. Alan Lee's work on this book, as well as the illustrated Lord of the Rings, led to him being approached by Peter Jackson to join the film trilogy as Conceptual Artist.

The same artistic vision, present in his beautiful paintings and drawings, played a major role in the look of the films, and his work received the ultimate accolade with an Academy Award for Best Art Direction on The Return of the King.