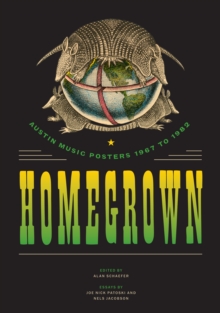 Before Austin became the "live music capital of the world" and attracted tens of thousands of music fans, it had a vibrant local music scene that spanned late sixties psychedelic and avant-garde rock to early eighties punk.

Venues such as the Vulcan Gas Company and the Armadillo World Headquarters hosted both innovative local musicians and big-name touring acts.

Poster artists not only advertised the performances-they visually defined the music and culture of Austin during this pivotal period.

Their posters promoted an alternative lifestyle that permeated the city and reflected Austin's transformation from a sleepy university town into a veritable oasis of underground artistic and cultural activity in the state of Texas. This book presents a definitive survey of music poster art produced in Austin between 1967 and 1982.

Setting the posters in context, Texas music and pop-culture authority Joe Nick Patoski details the history of music posters in Austin, and artist and poster art scholar Nels Jacobson explores the lives and techniques of the artists.