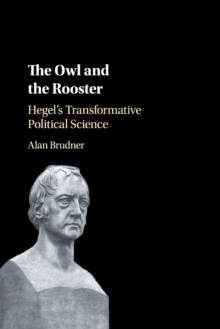 by Alan (University of Toronto) Brudner

Since 1945, there have been two waves of Anglo-American writing on Hegel's political thought.

The first defended it against works portraying Hegel as an apologist of Prussian reaction and a theorist of totalitarian nationalism.

The second presented Hegel as a civic humanist critic of liberalism in the tradition of Rousseau.

This book recovers what was lost in each wave. It restores aspects of Hegel's political thought unsettling to liberal beliefs, yet that lead to a state more liberal than Locke's and Kant's, which retain authoritarian elements.

It also scrutinizes Hegel's claim to have justified theism to rational insight, hence to have made it conformable to Enlightenment standards of admissible public discourse. And it seeks to show how, for Hegel, the wholeness unique to divinity is realizable among humans without concession or compromise and what role philosophy must play in its final achievement.

Lastly, we are shown what form Hegel's philosophy can take in a world not yet prepared for his science.