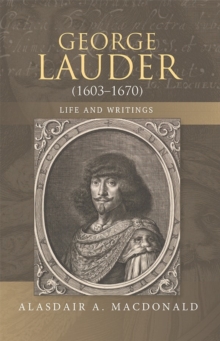 by Alasdair A. MacDonald

The Scottish poet George Lauder began as a "university wit", by imitating anti-papal satires popular in the Italian Renaissance.

He set off for London as a young man, looking for patronage, but instead became an officer in the army, seeing service in France, the Low Countries, Germany, Denmark and Sweden -- an experience which provides the backdrop to the poetry of his mature years.

At the Restoration he wrote a lengthy poem of advice to Charles II, and his final masterwork was a poetic conflation of the Gospel accounts of the life of Christ.

Lauder was influenced by Ben Jonson, William Drummond, and by the Metaphysical and the Caroline styles.

His personal library testifies to his wide range of interests, and to his acquaintance with European literature in neo-Latin and other languages. This volume traces Lauder's career, collects all his surviving verse (presented with full notes and commentary), and examines his interactions with certain of the greatest intellectuals of the Dutch Golden Age.

Lauder was a British patriot and a loyal supporter of the House of Orange; above all, however, he is the author of a unique corpus of highly accomplished poetry. ALASDAIR A. MACDONALD is Emeritus Professor of English Language and Literature of the Middle Ages, University of Groningen, Netherlands.