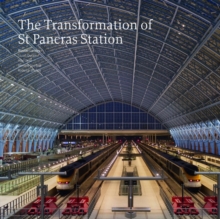 At the end of 2007, St Pancras became the new London terminus for the high-speed channel tunnel rail link to continental Europe, taking over from Waterloo International.

Central to this change, the entire structure and area around St Pancras have been renovated and transformed as one of the largest civil engineering projects in Europe.

This book looks at the history and process of the project and shows how the old St Pancras - one of London's finest Victorian stations - has been both restored to its original glory and extended for the demands of 21st-century rail travel.

Packed full of specially commissioned photography and written by those intimately involved in the project, The Transformation of St Pancras Station tells the remarkable story of how the original building was renovated and expanded with major new additions and how the surrounding area has been regenerated to become a desirable destination in its own right.