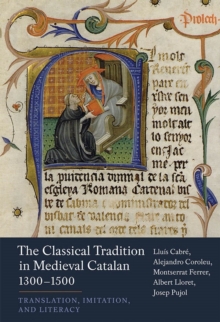 This book offers the first comprehensive study of the reception of the classical tradition in medieval Catalan letters, a multilingual process involving not only Latin and Catalan, but also neighbouring vernaculars like Aragonese, Castilian, French, and Italian.

The authors survey the development of classical literacy from the twelfth-century Aragonese royal courts until the arrival of the printing press and the dissemination of Italian Humanism.