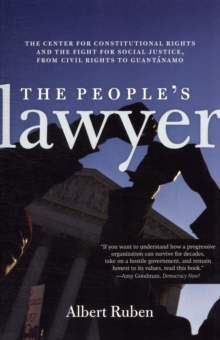 The People's Lawyer : The Story of the Center for Constitutional Rights Paperback / softback

There is hardly a struggle aimed at upholding and extending therights embedded in the U.S.

Constitution in which the Centerfor Constitutional Rights (CCR) has not played a central role, and yet few people have ever heard of it.

Whether defendingthe rights of black people in the South, opponents of the war inVietnam and victims of torture worldwide, or fighting illegalactions of the U.S. government, the CCR has stood ready totake on all comers, regardless of their power and wealth.

Whenthe United States declared that the Constitution did not applyto detainees at Guantanamo, the CCR waded fearlessly intobattle, its Legal Director declaring, "My job is to defend theConstitution from its enemies.

Its main enemies right now arethe Justice Department and the White House." In this first-ever comprehensive history of one of the most important legal organizations in the United States, the Center forConstitutional Rights, Albert Ruben shows us exactly what itmeans to defend the Constitution.

He examines the innovativetactics of the CCR, the ways in which a radical organization isbuilt and nurtured, and the impact that the CCR has had onour very conception of the law.

This book is a must-read notonly for lawyers, but for all the rest of us who may one day findour rights in jeopardy.