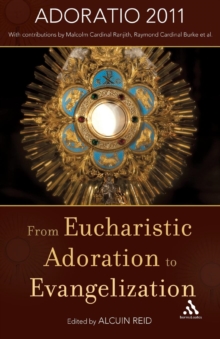 This is a collection of essays and homilies from Pope Benedict, Cardinals and Bishops focusing on the relevance of Eucharistic adoration for liturgy, spirituality and mission today.

Pope John Paul II said that in order to evangelize the world, we need experts in celebration, adoration and contemplation of the Holy Eucharist.

There can be no doubt, that there is a new springtime of Eucharistic adoration, partly due to the efforts and liturgical reform of Pope Benedict XVI himself.

June 2011 will see a major event in Rome focusing on the ancient liturgical ceremony of Eucharistic adoration and its relevance to the world today.

The conference brings together a wide range of international speakers, including six prominent Cardinals and will make a major contribution to the sacramental and spiritual life of the Catholic Church worldwide.

The conference will conclude by joining with Pope Benedict in his celebration of the Solemnity of Corpus Christi at the Basilica of Saint John Lateran and the Eucharistic procession to the Basilica of St Mary Major that follows. The present volume is the fruit of this conference, bringing together all the contributions and homilies given at the major celebrations of the mass.