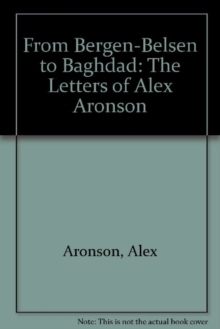 From Bergen-Belsen to Baghdad : The Letters of Alex Aronson Paperback / softback

In 1943, Aronson was deported together with his mother to the concentration camp Bergen-Belsen.

Although over two thirds of the Dutch Jews deported to Bergen-Belsen did not remain alive at the end of the war, Aronson and his mother survived.

Upon his return to Amsterdam, Aronson attended the Jewish Secondary School from 1948 to 1951.

In 1952 he received a certificate in chiropody and also studied nursing at the Jewish Hospital in London.

He emigrated to Israel in 1955 and spent most of the next six years travelling in India, The Middle East, Europe and Africa before returning to Amsterdam in 1962.

In 1964 Aronson married Elisabeth van Dieijen, and their son Alwin was born the same year.

He worked for The Red Cross during the latter part of the 1960s in Africa, returning to Holland in 1970, but returned to India at the end of the year.

In August 1974, he travelled to Kurdistan where he was arrested in March 1975 by the Iraqis on charges of spying for Israel.

On 15 March 1976, the Iraqi Embassy admitted that Aronson had been executed in Baghdad although the exact date of his death was never revealed. In April 1976 his mother was able to obtain his remains, and Aronson was buried on 26 May 1976 in the Jewish Cemetery in Muiderberg, Holland.

Alan Mendelson, co-editor of "From Bergen-Belsen to Baghdad" was a student at the Hebrew University in Jerusalem when he met Aronson in 1962.

They travelled together, and Aronson later visited Mendelson, who is Alwin's godfather, in 1970 when the editor was a graduate student at the University of Chicago.

Their last meeting took place in the spring of 1974 when Mendelson visited Aronson in Holland.

Music and the Novel