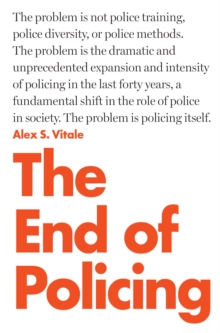 The End of Policing Paperback / softback

The problem is not overpolicing, it is policing itself Recent years have seen an explosion of protest and concern about police brutality and repression--especially after months of violent protest erupted in Ferguson, Missouri following the police killing of Mike Brown.

Much of the conversation has focused on calls for enhancing police accountability, increasing police diversity, improving police training, and emphasizing community policing.

Unfortunately, none of these is likely to produce results, because they fail to get at the core of the problem.

The problem is policing itself--the dramatic expansion of the police role over the last 40 years.

This book attempts to jog public discussion of policing by revealing the tainted origins of modern policing as a tool of social control and demonstrating how the expanded role of the police is inconsistent with community empowerment, social justice--even public safety.

Drawing on first-hand research from across the globe, Alex Vitale shows how the implementation of alternatives to policing, like drug legalization, regulation, and harm reduction instead of the policing of drugs, has led to reductions in crime, spending, and injustice.