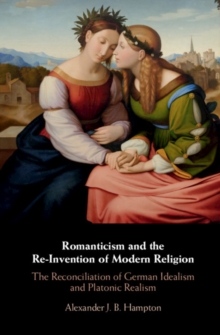 Romanticism and the Re-Invention of Modern Religion : The Reconciliation of German Idealism and Platonic Realism Hardback

by Alexander J. B. (University of Toronto) Hampton

Early German Romanticism sought to respond to a comprehensive sense of spiritual crisis that characterised the late eighteenth century.

The study demonstrates how the Romantics sought to bring together the new post-Kantian idealist philosophy with the inheritance of the realist Platonic-Christian tradition.

With idealism they continued to champion the individual, while from Platonism they took the notion that all reality, including the self, participated in absolute being.

This insight was expressed, not in the language of theology or philosophy, but through aesthetics, which recognised the potentiality of all creation, including artistic creation, to disclose the divine.

In explicating the religious vision of Romanticism, this study offers a new historical appreciation of the movement, and furthermore demonstrates its importance for our understanding of religion today.