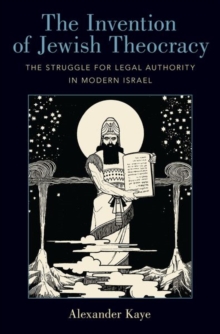 The Invention of Jewish Theocracy : The Struggle for Legal Authority in Modern Israel Hardback

The tension between secular politics and religious fundamentalism is a problem shared by many modern states.

This is certainly true of the State of Israel, where the religious-secular schism provokes conflict at every level of politics and society.

Driving this schism is the idea of the halakhic state, the demand by many religious Jews that Israel should be governed by the law of the Torah as interpreted by Orthodox rabbis.

Understanding this idea is a priority forscholars of Israel and for anyone with an interest in its future.

The Invention of Jewish Theocracy is the first book in any language to trace the origins of the idea, to track its development, and to explain its crucial importance in Israel's past and present.

The book also shows how the history ofthis idea engages with burning contemporary debates on questions of global human rights, the role of religion in Middle East conflict, and the long-term consequences of European imperialism. The Invention of Jewish Theocracy is an intellectual history, based on newly discovered material from numerous Israeli archives, private correspondence, court records, and lesser-known published works.

It explains why the idea of the halakhic state emerged when it did, what happened after it initially failed to take hold, and how it has regained popularity in recent decades, provoking cultural conflict that has severely shaken Israeli society.

First, it argues that religious politics in Israel can be understood only within the context of the largely secular history of European nationalism and not, as is commonly argued, as an anomalous exception to it.

It shows how even religious Jews most opposed to modern politicalthought nevertheless absorbed the fundamental assumptions of modern European political thought and reread their own religious traditions onto that model.

Second, it demonstrates that religious-secular tensions are built into the intellectual foundations of Israel rather than being the outcome of major events like the 1967 War.

These insights have significant ramifications for the understanding of the modern state.

In particular, the account of the blurring of the categories of "secular" and"religious" illustrated in the book are relevant to all studies of modern history and to scholars of the intersection of religion and human rights