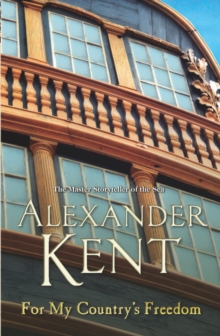 March, 1811After two and a half months of precious peace in Cornwall with his beloved mistress Catherine, Admiral Richard Bolitho is once again summoned to London.

In defence of an Empire, the Admiralty must quell the unrest in America - or face the war with those who were once friends.

For when diplomacy fails, the cannon will speak. For his daring mission, Bolitho must call on the loyalty of his most trusted officers - and the trust of those he loves the most.

Distance too is their enemy, as the Indomitable leads the fleet from Plymouth towards the rich merchant grounds of the Americas. In the troubled seas from Antigua north to Halifax, Admiral Bolitho's revolutionary 'flying squadron' will face their first and harshest test.

For a country's freedom. For a hero's right to turn his back on the sea ...