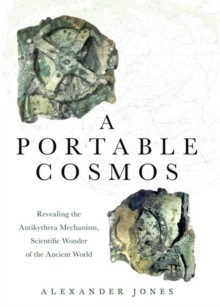 by Alexander (Professor of the History of the Exact Sciences in Antiquity, Institute for the Stu Jones

From the Dead Sea Scrolls to the Terracotta Army, ancient artifacts have long fascinated the modern world.

However, the importance of some discoveries is not always immediately understood.

This was the case in 1901 when sponge divers retrieved a lump of corroded bronze from a shipwreck at the bottom of the Mediterranean Sea near the Greek island of Antikythera.

Little did the divers know they had found the oldest known analog computer in the world, an astonishingdevice that once simulated the motions of the stars and planets as they were understood by ancient Greek astronomers.

Its remains now consist of 82 fragments, many of them containing gears and plates engraved with Greek words, that scientists and scholars have pieced back together through painstakinginspection and deduction, aided by radiographic tools and surface imaging.

More than a century after its discovery, many of the secrets locked in this mysterious device can now be revealed.

In addition to chronicling the unlikely discovery of the Antikythera Mechanism, author Alexander Jones takes readers through a discussion of how the device worked, how and for what purpose it was created, and why it was on a ship that wrecked off the Greek coast around 60 BC.

What the Mechanism has uncovered about Greco-Roman astronomy and scientific technology, and their place in Greek society, is truly amazing.

The mechanical know-how that it embodied was more advanced than anything theGreeks were previously thought capable of, but the most recent research has revealed that its displays were designed so that an educated layman could understand the behavior of astronomical phenomena, and how intertwined they were with one's natural and social environment.

It was at once a masterpiece ofmachinery as well as one of the first portable teaching devices.

Written by a world-renowned expert on the Mechanism, A Portable Cosmos will fascinate all readers interested in ancient history, archaeology, and the history of science.