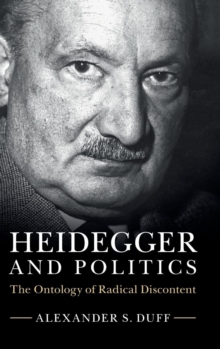 Heidegger and Politics : The Ontology of Radical Discontent Hardback

In this fresh interpretation of Heidegger, Alexander S.

Heidegger and Politics argues that Heidegger's political import is forecast by fundamental ambiguities about the status of politics in his thought.

Duff explores how, in Being and Time as well as earlier and later works, Heidegger analyzes 'everyday' human existence as both irretrievably banal but also supplying our only tenuous path to the deepest questions about human life.

Heidegger thus points to two irreconcilable attitudes toward politics: either a total and purifying revolution must usher in an authentic communal existence, or else we must await a future deliverance from the present dispensation of Being.

Neither attitude is conducive to moderate politics, and so Heidegger's influence tends towards extremism of one form or another, modified only by explicit departures from his thought.