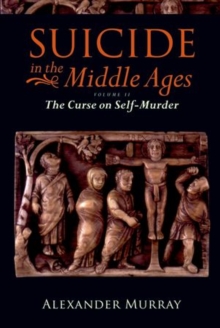 Suicide in the Middle Ages, Volume 2 : The Curse on Self-Murder Paperback / softback

A group of men dig a tunnel under the threshold of a house.

Then they go and fetch a heavy, sagging object from inside the house, pull it out through the tunnel, and put it on a cow-hide to be dragged off and thrown into the offal-pit.

Why should the corpse of a suicide - for that is what it is - have earned this unusual treatment?

In The Curse on Self-Murder, Alexander Murray explores the origin of the condemnation of suicide, in a quest which leads along the most unexpected byways of medieval theology, law, mythology, and folklore -and, indeed, in some instances beyond them.

At an epoch when there might be plenty of ostensible reasons for not wanting to live, the ways used to block the suicidal escape route give a unique perspective on medieval religion.